In the work “balloonhandwritting blue” appears the simultaneous presence of writing and image, both on a single surface. This work evokes the impression and the reminiscence of graffiti and inscriptions, as in the epigraphs. Calligraphic signs are interwoven with images, both have a value of occult symbols or arcane textual fragments; the image appears as a tangle or weave, but it could also be read as a tissue or series of channels/filaments. In the work the phrase "I will die" appears with forms obsessive and repetitive, assumes the function of a "sort of meditation” and, in the meanwhile, a "sort of anesthesia” 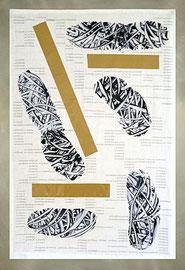 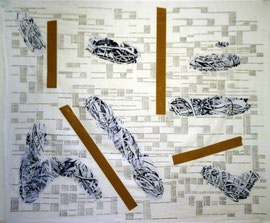 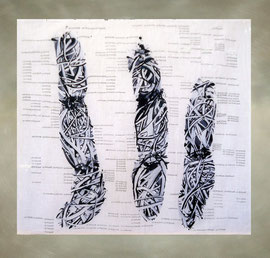 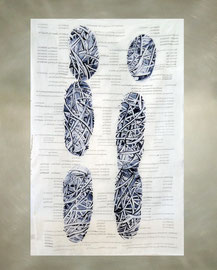 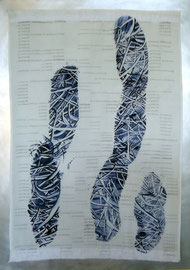 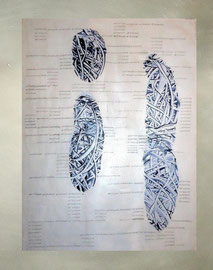 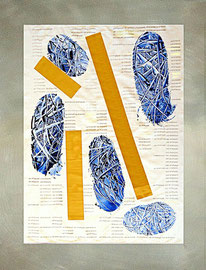 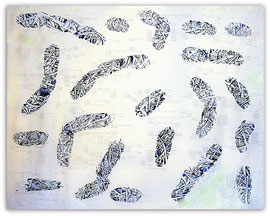 Type: painting on canvas and hand-writing.

The work: what does the point of view means?

Solares creates a work where appears the simultaneous presence of writing and image, both on a single surface. Also this work evokes the impression and the reminiscence of graffiti and inscriptions, as in the epigraphs.

Calligraphic signs are interwoven with images, both have a value of occult symbols or arcane textual fragments; the image appears as a tangle or weave, but it could also be read as a tissue or  series of channels/filaments. The only function of this artistic choice is to reveal a capacity of travalicare its meanings, more obvious and easily usable for showing and analysis the mental dimension. The reason is the crossboard and interactive nature of mental dimension between the world of the signs (such as the writing) and the concrete, ordinary and sometime confused daily world. Between this two poles the artist has created its own language and sematic, through a new personal code that looks like a real puzzle to be decipher, but which is capable of showing a true cosmogony; the center of which is the relationship between life and death.

From this landscapethe work “balloonhandwritting v1” is based on a magic writing that aspires to place the viewer in front of the importance of his being here and  now (hic et nunc). The artist reflects about the precariousness of life, she sees and conceive the death as a: “equal to the event of being born"; but unfortunately this vision is a taboo in our contemporary daily times.

In the work the phrase "I will die" appears with forms obsessive and repetitive. This artistic solution give us the impression that the only way for the artist to soothe the anguish of our life with clarity and a valid gnostic framework; expecially in comparison with the life in itself, in its  proceeding and in its processes. This impression is pledged by the “act in its application”, namely the act as an art. It consist in the act of making where and when the mode of the written sentence repeatedly assumes the function of a "sort of meditation” and, in the meanwhile, a "sort of anesthesia”.

Conceptually this work is related with the long chain of experiences that we find in history under the definition of "mementos mori". This sentence, in intalian language, flows across the surface of the canvas and creates a sort of cartography of signs. The linear appearance of the words, along with the blue monotone images, are combined in a game between full and empty, by removing from the point of views of the reader/viewer any easy landmarks to grip and anchor an immediate and trivial interpretation (or misinterpretation).

Solares in “balloonhandwritting v1”, as evidenced also in her previous works, is committed to experiment with different forms of expression, deepening the study of the technique and the ability to create a cross-contamination of processes and procedure, resulting in hybrid and innovative works.

In the last period the artist has developed his own personal painting technique that involves his body; in this way his physical presence becomes part of the physical realization of her works.

This embodied solution takes the advantage of use her body (forms, weight and dynamics) used to transfer the artistic idea, will and act inside the physical support of the work: "as if it were impressed".

Through this modus operandi Solares creates a special and recognizable pictorial sign that develops through a rigorous monochrome blue. The result of this hybrid painting experience is to be understood as a design metapainting (like a metalanguage), but that always appears on the canvas in a inverted mode; this characteristic is present in all her works.

Blue is a specific color choice and it is the characterizing part of the poetics of Solares, that  alludes to the conceptualization and use of colors like interiors stripes used to interpret and to encode, at the artistic level, our inner life and its mysteries.

Another feature of the work of Solares is the physical support used to realize the work; this support is formally assumed to appear as a sheet.

His works has another third feature, this consist to show the absence of frames and chassis.

This last feature is paired with the production of the work in itself: the immediate, direct and physical (boby) painting onto the canvas; without any preparation.

In general Solares’s works are conceive to be rolled or folded, very easy to put inside your suitcase: very near to our daily life and also for the exportation of the art exhibitions.

In fact one artist, with his works in a suitcase, can reach his destination and just ready to exhibit his works; and then again, after a while, to reach another destination.